Read my interview in the June 2020 issue of THE BIG THRILL magazine about THE VIGILANT SPY. Click here to read interview.

Read my interview in the November 2018 issue of THE BIG THRILL magazine about THE FAITHFUL SPY. Click here to read interview.

Read my interview in the April 2017 issue of THE BIG THRILL magazine about THE FOREVER SPY. Click here to read interview.

Read my interview in the April 2016 issue of THE BIG THRILL magazine about THE GOOD SPY. Click here to read interview.

The I SPY Panel at Left Coast Crime 2016 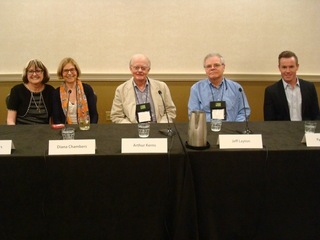 In late February 2016, I attended a writer’s conference in Phoenix called Left Coast Crime 2016. Left Coast Crime (LCC) is an annual event that is sponsored by mystery fiction fans. Over 700 people attended the convention, consisting of authors, literary agents, publishers and most notably, mystery fans. To me, the large number of fans that attend the Left Coast Crime gatherings is what makes the conference so unique. LCC fans can mix easily with the authors they love to read.

As a thriller writer and an attendee of LCC 2016, I was invited to participate on an author panel called I SPY. The topic, as you might expect, was espionage. Accompanying me on the panel were thriller authors Diana Chambers, Arthur Kerns and Ryan Quinn. Annette Rogers, editor of Poisoned Pen Press, was our moderator.

As part of the panel discussion, Annette Rogers asked how we came up with the ideas for our stories. Diana Chambers uses her extensive foreign travel experience in the marvelous thrillers she writes. Art Kerns, a retired FBI special agent who worked in counter intelligence and counterterrorism, has a rich reservoir of overseas assignments to call upon in the terrific foreign-based thrillers he pens. Ryan Quinn, a superb athlete who has worked in the publishing industry in New York uses his experience to write best-selling espionage-conspiracy thrillers.

For my part, I explained that all of my stories have waterfront settings and most are located in the Pacific Northwest—where I reside and work as a coastal engineer. Because my stories often involve the U.S. military, the Puget Sound region is a fantastic story source for me. There are numerous army, air force and naval facilities located throughout the region. My inspiration to write THE GOOD SPY originated, in part, from one of those bases.

The U.S. Navy homeports a squadron of Ohio-class submarines at Naval Base Kitsap-Bangor on Hood Canal, which is located about 20 miles west of downtown Seattle. Each of the submarines carries 24 Trident intercontinental ballistic missiles with each missile carrying up to a dozen independently targetable nuclear warheads. The Trident subs are the United States’ most lethal weapon system.

Tracking Trident subs in order to kill them during war is the principal mission of Russian attack submarines. For years, the Russian Navy and others have been spying on the Trident fleet, trying to detect and record the missile boats’ minuscule acoustic signatures as they prowl deep down in the North Pacific Ocean. In their effort to gather intelligence on the Ohio’s, Russian submarines have even ventured into the Strait of Juan de Fuca all the way to Whidbey Island, which is near Seattle.

Based on the Russian Navy’s past submarine incursions into Puget Sound and the current deteriorating relations between the Kremlin and the White House over Russia’s bullying of its neighbors, I decided to use the Trident submarine base on Hood Canal and another joint US-Canadian naval facility in British Columbia as targets of a new round of espionage by Russian submarines. In THE GOOD SPY, one of those spy sub missions ends in disaster.

Marooned on the bottom under seven hundred feet of water in United States territory, the fate of the surviving crew rests with a Russian naval intelligence officer. Yuri Kirov’s mission is to rescue the crew without tipping off the U.S. Navy—a Mission Impossible that might just be possible with a little luck and help from an unexpected ally.

That’s enough of my tease for THE GOOD SPY. It’s time to wrap up my LCC experience.

The audience for our panel enjoyed hearing how we develop our stories and asked a number of follow-up questions. Overall, Left Coast Crime 2016 and the I SPY panel were a pleasant experience for me. 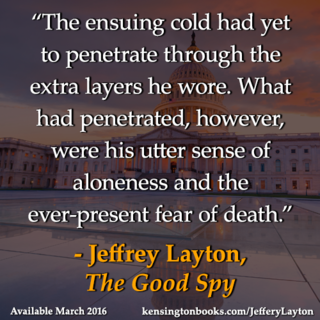